As promised, here is another easy fingerpicking song: the old children's song, Skip to My Lou. It's a melody almost everyone knows, and in terms of chord progression, you can't get much simpler than this. This arrangement is in the key of D, and it's composed of only two chords: D and A7. In addition to making it easy to focus on the fingerpicking technique without worrying about a complex arrangement, the simplicity of the chord progression leaves a whole lot of room for improvisation around the basic melody, if you so desire.

The one little twist I've added is that the song is in an alternate guitar tuning called dropped-D tuning. Don't let that scare you off, though, as this is one of the easiest alternate tunings to use and one that all guitarists should familiarize themselves with.

Dropped-D tuning (also sometimes spelled "drop D") is the same as standard guitar tuning except that the low E string is "dropped" down a whole step to D. The easiest way to get there from standard tuning is to pluck the D on the open fourth string, then pluck the E on the open sixth string and loosen the sixth string until the sound is one octave below the fourth string. If you're not used to recognizing octaves by ear, it may take a little practice. You can check yourself by fingering the seventh fret on the sixth string, and it should sound the same as the open fifth string. The first few times you may want to also check yourself with an electronic tuner, but it's good to be able to do this by ear, so keep practicing that. (There are also some ear training exercises on this site.)

Dropped D tuning is great for playing songs in the key of D, because it gives you that great low low looow D on the bottom string. When playing in the fingerpicking style, you can just alternate between the open sixth and fourth strings, which are both D but an octave apart. This creates a wonderful droning sound, while leaving all your fingers free to play the melody line.

Here's how to play an open D chord in dropped D tuning. Notice you can use all the strings, giving the chord a really full sound. Use your index finger to form a bar across the three highest strings (the G, B, and high E strings) at the second fret. Then use your middle finger to play the second (B) string, third fret. This way of playing a D is slightly different from what most people learn, but it is important to use your index finger to form the bar because it frees up your pinky to reach down to the fifth fret on the first string, which we need to do for this song's melody line.

The open A7 chord is typically played the same in dropped D tuning as it is in standard tuning, since the low sixth string is not involved. 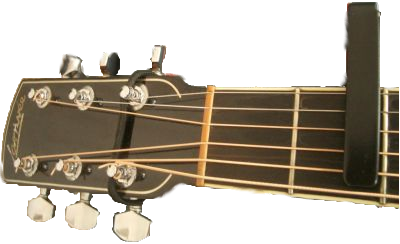 If you have a quick-change capo, you can achieve a similar effect to dropped-D tuning without actually turning any pegs. By placing the capo in such a way that it holds down the first five strings at the second fret but leaves the low E string open, you are in effect raising all except the low E string by a whole step. This will be the same as dropped-D tuning except everything will be a whole step higher.

You can hear me playing this easy arrangement of Skip to my Lou, along with some simple variations. Don't be afraid to play around with the melody line and the rhythm.

And now, the tablature

Discuss this in the Guitarator Forum